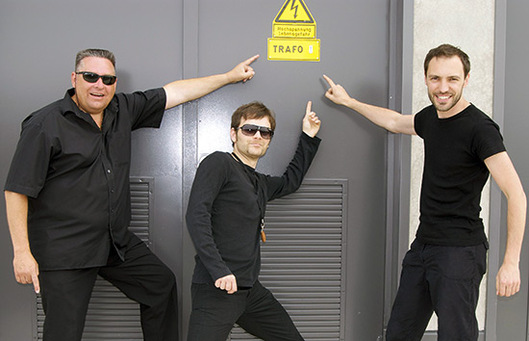 Sadlo (first left) grew up in Zirndorf, where his talent was recognized early on: In 1967 he began to learn classical drums and at the age of 12 he took classes as a guest student at the Meistersinger-Konservatorium in Nuremberg, which later became the Nuremberg University of Music.

He studied at the University of Music in Würzburg with Siegfried Fink. In 1982 he became solo timpanist at the Munich Philharmonic under Sergiu Celibidache, who greatly influenced his career.

In 1983 he took on a professorship for timpan and drums at the Munich University of Music and Theatre, in 1990 he became a professor at the Mozarteum in Salzburg. Since he left the Munich Philharmonic in 1997 he has mainly performed as a soloist, often with a chamber music ensemble, e. g. with Gidon Kremer or the pianist Anna Gourari, but also with the percussion ensemble Nexus.

In addition to his concerts he also researches the possibilities of extending the sounds of the instrument, which was the topic of his thesis in musicology in 1997 at the University of Bucharest. Numerous contemporary composers – literature composed for percussion has only been in existence since the 20th century – have composed works for Peter Sadlo. Furthermore, he is very active in the development of new instruments (e. g. timpani) and has created his own drumstick series.

From 2007 to 2010, succeeding Gidon Kremer, he was the artistic director of the Basle festival "Les muséiques" with top-class chamber musicians. In addition, he has been the artistic consultant for the International Music Meeting Centre Haus Marteau in Lichtenberg, Upper Franconia, Germany since 2007. He has taught master classes for percussion there since 1989 and is the founder of the concert series "Haus Martau auf Reisen" (House Marteau on tour).